The SUB designed by customind | Sven Bastiaen Schulz wins 2nd price at the cargobike design competition hosted by IHK Dortmund. Equipped with a new modular box with integrated face-to-face rumble seat for two children, the innovative king-pin-steered bike impressed the jury by compact size, huge cargo volume, and stiff construction. Although hardly longer than a convetional holland bike, it can carry 6 standard beer crates or 4 standard beer crates and two children.
The audience and other participants at the following cargobike race complimented on the design, too, and many a test rides were held. My take from this great event is a lot of motivation to further develop this concept, originally only intended for private use.
My congratulations to Fabian of F&A , winner of the contest for his superlight and elaborated cargo bike.
Many thanks go to IHK Dortmund. All the best on their way to make Dortmund the capital of cargo bikes, especially since I built my first cargobike just there 25 years ago! I hope to see everyone next year.

Since a few days THE SUB hits the street, the first prototype of the (probably) first cargo bike with a king-pin steering. Furture development goals are: save weight by 25% , replace the moror bike parts by genuine bike components, reduce vertical clearance side and 1000other ideas. And then: get to production.!

Thanks to my old friend Janne from Finland, this story about the Amfibiokinneri (Amphibike) by Jukka Henttu and myself in Bike Cuture magazine in 1999 has been rediscovered.

In a sunny apartment in central Helsinki, 79-year-old Reine Karpio speaks of wonders: of iceboats, gliders, rocket-powered model boats, catamarans, trimarans, and of the amazing Amfibiokinneri: the Amphibike.

"If you reach Stockholm I`ll eat my length in shit.”

The Finnish bet was customary, but its object was not: an attempt to pedal an amphibious velomobile over land and sea from Helsinki to Stockholm. The date was as startling as the challenge: not the high-tech, affluent 1990s but the low-tech, war-scarred Finland of the late 1940s. Nearly fifty years on we visited the pioneer amphibious cyclist to find out more about one of the most remarkable feats in cycling history.

Reino Karpio is a small, wiry, lively man of nearly eighty. An independent and open spirit, he has spent his life designing, constructing and experimenting. He shows us pictures of iceboats, gliders, a rocket-powered model boat, and of his great love, the catamarans and trimarans he has been building longer than almost anyone else. Reino is a natural raconteur, and over afternoon coffee his tales reach back in time to the late 1940s, and the feat that brought him international fame: the Amfibiokinneri, or Amphibike.

In the aftertmath of the Second World War, when Finland was fiercely resisting occupation by the Soviet Union, motor fuel was scarce and car ownership beyond the reach of almost everyone. Individual mobility was pedal-powered, and, from the Riviera to Scandinavia velomobiles — faired cycles — plied the roads in surprising numbers. ln Sweden, according to Reino, eleven thousand velomobiles were in use in the post-war years, their fairings providing vital protection against cold, rain, wind and snow. There were even occasional HPV races.

Finland presents special problems for cyclists, for it is the country of lakes. With post-war roads often unsurfaced and muddy, water transport was often faster and more direct than land transport. Reino decided to build a velomobile with a closed bottom that could tackle land and water alike: the Amphibike was born. A craft teacher by profession, Reino was well-equipped to start experimenting. To determine the size of fairing that would be needed, he installed a seat and a pair of cranks under his parents kitchen table. The testing was interrupted by a visiting village priest, who recoiled, pale-faced, to the door: “What kind of house is this?” he exclaimed. The young man under the table continued pedalling wildly...

In 1949 the vehicle was ready for testing and a crowd of excited spectators assembled round the Ankkalampi (duckpond) in Helsinki. The police arrived, alerted by a report of a dead body ﬂoating on the pond. The testing was a success, and the Amphibike was exhibited at a craft show in Helsinki.

The basic design was of a two-person recumbent trike: two wheels at the front, one at the back, front steered, rear- powered, with a friction-driven propeller and plywood rudders on the front wheels. In front of the two riders: a plywood steering wheel, linked to the front wheels by a chain and sprocket, and a pair of treadles, rather than pedals. Between them: a single chain transmission to the rear wheel equipped with a trusty Sturmey-Archer three-speed hub. Behind them: a propeller, made from a shell case engaged with the rear wheel by a lever at the front. All around them, above and below: a fairing, made from aeroplane plywood, 1.2 mm thin. The vehicle was given a futuristic appearance by two aircraft-style sliding cockpit covers, four bulges in the bonnet to provide room for the knees, and a coat of silver oven paint. The whole thing was a mix between a velomobile, a glider and a racing car, and it even had sponsorship: the sides read: "Ranamalt ger dig kraft" (”Ranamalt gives you power”).

Reino later assessed the Amphibike in the special 1949 'kinneri-numero‘ of Jokan Poian Askartelua, the Finnish equivalent of the British Boys Own Paper, which contained numerous technical drawings. On flat ground it outperformed a normal bike, especially against headwinds. It was stiff, with little vibration, and smooth and easy to control. It was slower uphill, vulneralble to sidewinds, and tended to overheat and develop condensation. Nonetheless, one person could ride it easily. On water it accelerated well at first, until hydrodynamic resistance put at limit on speed. Its handling was good, and it was stable within generous limits. The propeller was a problem, subject to strain because of its depth relative to the hull, as the voyage was to show. In retrospect, Reino says, he would would have preferred an an arrangement of scoops, turning the rear wheel into a paddle wheel: less efficient, but mechanically simpler and sturdier.

Somewhat rashly, the publicity given to the press claimed the Amfibiokinneri was capable of crossing the sea to Stockholm, some 370 km (230 miles) as the crow ﬂies. "If you reach Stockholm I'll eat my length in shit", said a disbelieving visitor. So...

In the spring of 1949, Reino Karpio and his friend Matti Näränen began their epic voyage between the Finnish and Swedish capitals, from Helsinki to Stockholm across the Baltic sea. Matti couldn't ride a bike and had never sailed, but living on the seventh floor of a building without a lift had given him stamina. Loaded with (amongst other things) inner tubes from lorry tyres for emergency buoyancy and paddles for emergency power, the Amphibike weighed 65 kg. Downhill it could manage 45 km/h: on water it did up to 5 knots (roughly 9 km/h) and typicaly churned along at 2-3 knots. On country roads it startled horses, scattering carts to the ditches. On one downhill section the play in the steering proved too much to handle and they turned over into a ditch themselves, but there was no serious damage. They arrived in one piece at the coastal town of Turku in south-west Finland.

The next stage was a cruise through the Finnish archipelago to Mariehamn, capital of the Aaland Islands in the souther gulf of Bothnia between Finland and Sweden. It was a strange voyage, undertaken without a compass, for there was too much metal on the kinneri, through a treacherous maze of rocks and small islands. At one island, when they changed course to ask some people for directions, everyone hid behind a rock. They had been fishing illegally, and mistook the Amphibike for some new secret weapon of the coastguard.

They were also short of a clock, but there was a solution. With the chain passing close to the waterline of the loaded vehicle, water dripped off it at a constant rate. It was collected in old cans, creating a mobile clepsydra or water clock: canned time!

Everything was going fine until the propeller broke. It took two days to paddle to Mariehamn, two days without food or water, during which the Finnish coastguard declared them lost at sea. Their arrival at Mariehamn was a surprise, especially for their challenger, who found himself sleeping in the bunk above them at the seamens' hostel. More nervously this time, he renewed his coprophagic challenge.

The propeller was repaired but their departure on the second leg of the voyage was delayed for twelve hours by storms, which they waited out at a pilot station. Meanwhile, news of their attempt had reached the Stockholm press, becalmed in the silly season and anxious for copy. The newspaper Afton-bladet sent out a fishing boat to escort them in while its rival, the the Expressen, sent out a seaplane. The old sea dogs of the fishing boat had the better nose for wind and weather, and the scoop was won by old technology.

Reino and Matti reached Stockholm on July 24th to a hero's welcome, two and a half weeks alter leaving Helsinki. The famous sportsman Prince Bertil sent greetings, the Amfibiokinneri was displayed at the World Sport Expo and the two nautilokineticists spent all day long autographing young womens shawls — a fashion of the time, apparently.

The aftermath of the voyage was less euphoric. Arriving back in Helsinki by ship, they found their sponsor Ranamalt bancrupt and they never saw any money. To finance new projects Reino sold the Amfibiokinneri to the owner of a sports shop for use as a street advert. Come winter, the elegant tail fins were cut off to make the vehicle fit in the shops attic. The Sports Museum turned down an offer of the vehicle but the Technical Museum of Helsinki was interested. Reino believes the "Kinneri" was still at their depot in 1996 but at our recent inquiry it could not be found.

It is not known, whether the other side of the bet was ever fulfilled. 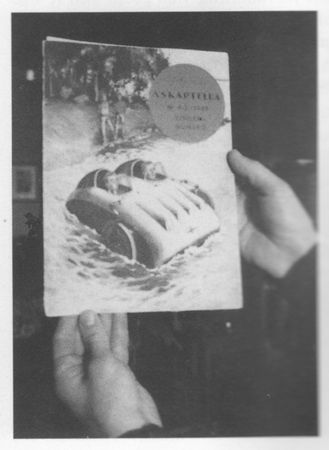 The aftermath of the voyage was less euphoric. Arriving back in Helsinki by ship. thcy found their sponsor (Ranamalt gives you power) had conked out and was bankrupt; they never got their sponsor money. To finance new projects they sold the Amphibike to the owner of a sports shop, as a street advert. Come winter the streamers were cut off to fit it into the shop's attic. The Sports Museum turned down the vehicle, but the Technical Museum of Helsinki was interested. Reino believes it was still in their warehouse in 1996, but at the last inquiry it couldn't be found.

It is not known whether the other side of the bet was fulfilled.

When I saw the picture of a Long John produced by the danish company SCO in winter 1990, it was crisp clear: I have to get one. But the price was prohibitive (at that time Mountain bikes were in their infancy  and a 4 digit price for a bike was unimaginable). DIY was the only way forward. In this situation I ran into the little book "Einfälle-statt-Abfälle" by Christian Kuhtz from Kiel, that helped me to break trough. In September `91 Long John was on the road. In daily life as well as on hollidays, several thousand kilometers were pedaled to transport water boxes, waste paper for recycling, to savely carry my guitar or bring friends to the station. Eventually I gave it to a friend, who uses it as a deliverybike for his bioshop. My "Long John" still runs today. (Did anyone say anything against 1970´s bike junk?)